A downloadable game for Windows, Linux, and Android

One Last Planet (OLP in short) is a 2D action platformer, Rogue-Lite, node-based exploration and resource management game where difficulty rises by time, weapons and enemies’ abilities are procedurally generated (not yet enabled) and you get to fight both in multiple planet lands and in space.

Inspired by both Risk of Rain and Faster Than Light, OLP is a combination of the two. You get to fight in land the various planet enemies and monsters and in space you fight other spaceships, plus you get to encounter several random events where you have to choose from the variety of narrative options to survive.

The game is currently in prototyping phase and have no story embed into it yet, see the  downloadable PDF document for more details and whats to come in OLP. 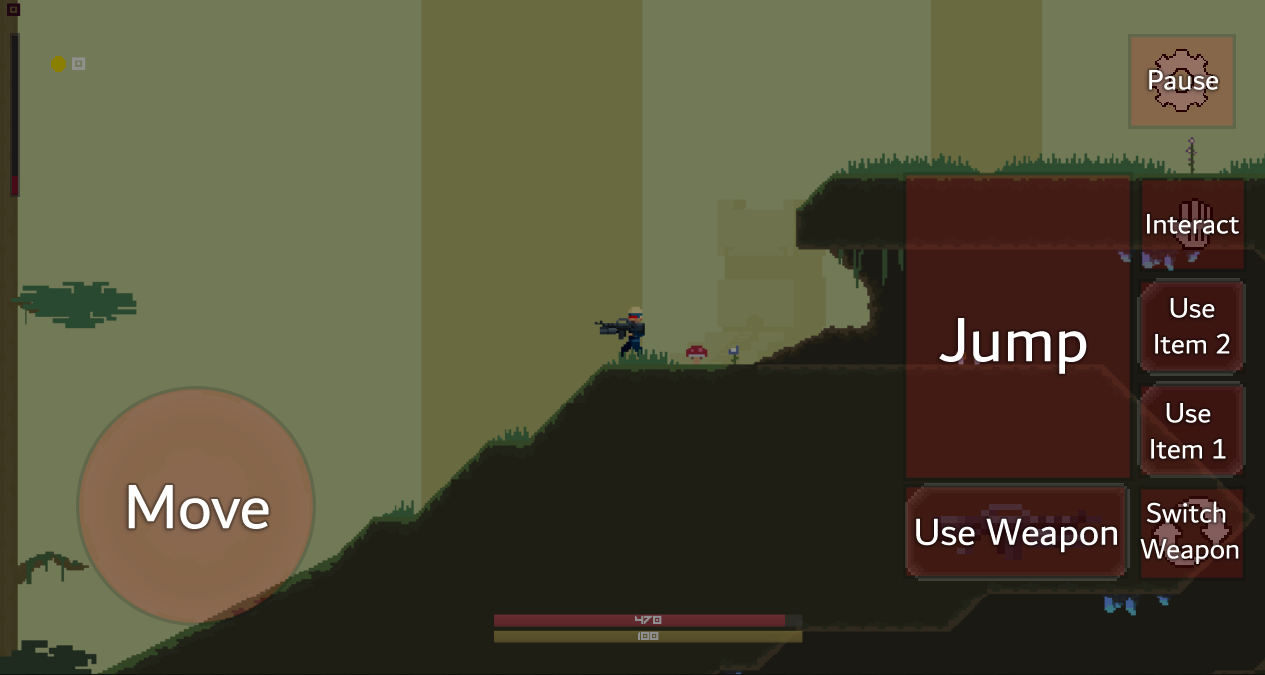 This game has potential and, for a proto-type, it actually has a decent amount going for it!

If you'd like a little feedback on the game, here's a few things if/when you can:

- controls need tightened up a bit; I'm sure other stuff takes priority ofc, but, particularly the controls navigating the ship in ftl mode either ship I find it difficult to get where I need to go.

1. In ship 1's case the ladder constantly gets the character stuck and it takes a lot of doing to access the middle level and leaving the ladder at the bottom. Also, the powerups collected on the planet are still active on the ship which makes it more difficult to deal with the ladder. Suggestion for that: maybe disable the powerups on board the craft? As far as the ladder is concerned if there's a way to keep the up and down without the character being "locked in" that may very well resolve the issue.

2. Ship 2 IDK where to start, but can say it might be worth rethinking the vertical access hatches. I was not able to go to any part of the ship aside the bottom after returning from a planet. The issue is that you have to jump to try and get the hatch to open which, if you can, even if you double jump you don't have near enough time to get onto the second floor let alone the third. Maybe change the trigger for the hatches a bit above and below so that when you walk up to it it opens without contact? Also changing the timing would help I think. Like, speed up the opening, set a timer before the hatch starts closing and finally lower the speed of it closing, if that's possible with the tools/code you've got running under the hood. I know engine limitations can be a real pain to deal with.

3. The ship battles. Didn't know what I was doing/was unclear on how to access/fire the ship weapons. If you're looking for a redesign maybe have the guns auto lock and be tied to a hideable toolbar at the bottom? That or clarification on how to use them. I couldn't figure it out. OFC, I was flying blind so to speak because I didn't look at the controls in the description here so, that's probably the issue on my side.

That's about all I can think of for now, haven't got too far to provide other suggestions, and, for clarity, I'm giving this feedback because I really, REALLY like the premise of the game and am pleasantly surprised at the current functionality of it. Keep up the work and let me know if you want a play tester. Been gaming since the late 80's multiple consoles and a few PC's... probably to a bit of an unhealthy level lol, and am very much a fan of this project! Keep up the good work! YOUUU CAAANNN DOOOOO EEET!

Oh boy! This is a chunky comment, Thank you so much for giving the game a try and sharing your feedback and thoughts about it, I really appreciate these kind of comments the most.

Currently the game is quite different, both visually and gameplay wise, in short: everything is better with some additional major features.

I have mostly solved every Issue concerning the player movement and controls, the rest is just scheduled to be solved later on because as you already know other stuff takes priority.

For the space battle part: It was the least focused in the prototype, and because I did not provide any guide or tutorial on that part, I understand that the controls are not that intuitive.

Please know that the game is still in development and a demo for it is planed for release, its going to take a while but if you really want to be there when it resurface, please follow us on itch or on the other social medias provided on this page.

And again thank you so much for the encouragement!

Yeah, sorry about that, sort of long winded when I find something I like.

I figured there were things that were different in the release version than the prototype. I don't go on social media but will def follow you on itch for sure! Looking forward to this game! Keep up the awesome work and, I also love when there's a dev that takes the time to read a response and respond accordingly. You keep doing you and stay safe with all the craziness going on in the world.

Just install and use 7-zip instead, this should do the trick. don't forget to install the 32-bit version if you have a 32-bit system.

Did you stop development on this? I enjoyed what I played, though only the risk of rain style play seemed available, nothing resembling ftl(outside of starting off in a ship at least). Then again, it says it was made for an earlier version of Android so maybe thats the issue. Regardless, love the concept and would definitely buy a full version of the game if it ever becomes available.

Glad you liked it, The game is still in development and not stopping, the ftl part is weak in this prototype but its there, you got your spaceship battles and events occurring, not the whole ftl experience but its a start, the game is far from being finished, there is a lot added and a lot more to develop.

Thank you. What do you mean by "action delay", id like to know, maybe I'm missing something.

It's great, but I feel though it needs auto aim on mobile. Other than that, works and runs surprisingly well!

Thank you, for the auto aim I'm considering it to be a feature on some weapons but not all of them, because you will find some weapons are better aimed at walls to have the projectiles bounce to hit the same target multiple times than directly aim at the enemy, thank you for the feedback ill focus more on providing better controls for the mobile platforms.

Indies making good game because why not nice to know that there at least places outside of steam where I can find people who still care about gaming.

can you not just asset swap Risk of Rain and call it your own game please? thanks.

Don't worry, I'm aware of this, I'm planing so much for this game, just check the Game Showcase PDF file to get a glimpse of what I'm planing, there is a lot i did not state to avoid over promising, my goal is to make something new that I enjoy playing.

Can you also release it for macOS?  If you need someone to test and report bugs, message me and I'll be glad to help.

i will definitely release it on macOS later on, the goal is to release the game on as many platforms as possible.

You have a really cool game here, but the controls are not intuitive at all.

The controls will be fully reworked don't worry ;)

Oh great!  I look forward to that.

Quite fun game. Certainly needs lots of work to become a full game, but what is in the game is implemented very well, great job! The movement and tutorial might need a bit of work soon. Very enjoyable!

Great game. Controls need a little work though. Keep up the great work.

Thank you so much for the video! even tho the game is far from being completed you did a good job presenting it :D , for the movement, that's on my priority list for the next update.

Oh gosh, this has potential.

My only criticism for the moment would be regarding controls, it feels a bit stiff, a bit more "snap" to the jumping and shooting would do wonders.

But other than that, this is solid, presentation and graphics are great, can't wait for more updates!

thank you for giving it a try, my main focus after i do some code cleaning will be on movement aspects of the game, the controls, movement abilities like dashes, crouches, climbing and many more, please keep an eye on the game development on twitter @ichidown and thank you so much for the feed back !

The game is still in prototyping phase so this is my chance to get feedback and know what work and what don't in my game so i can improve it, please check it out and leave your impressions and thoughts about it, it will help me greatly, i am willing to accept all criticism, so don't hesitate and just just hit me!